According to him, the fact that only 34 percent of Ghanaians say they will vote for the incumbent party, shows that the NPP government has lost a lot of goodwill from the populace. 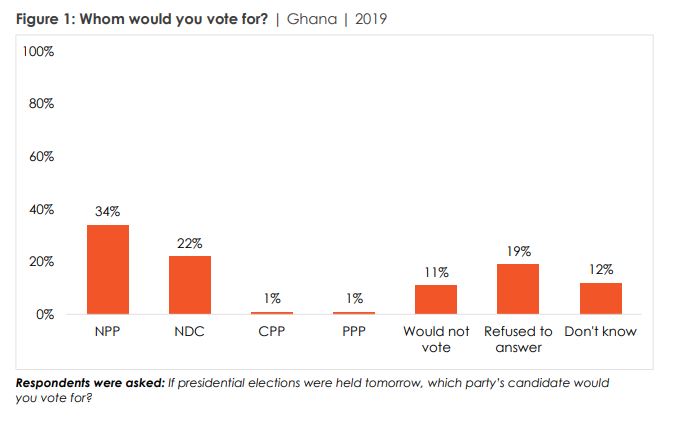 Otokunor in an interview on Eyewitness News on Monday said a lot of Ghanaians are unwilling to vote for the NPP government because they feel they are being misled by the government.

“The excepts are very telling to the extent that you have about 34% of the people saying they will vote for the NPP… The 15% drop is 15% of the people who voted for the NPP and now feel disappointed, they feel deceived, and misled by the Akufo-Addo government and for that matter they are unwilling to vote for them,” he said.

Otokunor added that there are several other indications that prove that many people have lost confidence in the government.

“If we do all the extrapolations, all things being equal you will see clearly that the NPP has lost strong support from the populace. You don’t even need the polls to tell you– You go on the streets, you go to the banks, the hospitals and the classrooms [and ask poeple. You will understand what I’m saying],” he said.

12% of Ghanaians indecisive ahead of 2020 elections – Afrobarometer report

The latest Afrobarometer report by the Center for Democratic Development (CDD) also indicated that 12 percent of Ghanaians are unsure of voting for any political party in the 2020 elections.

When asked which party’s candidate they would vote for if presidential elections were held the following day, more than four in 10 Ghanaians (42%) said they would either not vote (11%), did not know who to vote for (12%), or refused to answer the question (19%).

The report also showed that this percentage was the highest so far since 2008 after increasing by six points in the last two years.

For this survey, a total of 2,400 adult Ghanaians were interviewed between 16th September and 3rd October 2019.

Although the research comes at a time when momentum is beginning to be gathered by political actors ahead of the 2020 elections, producers of the Afrobarometer report said it is impossible to draw solid conclusions about a
likely election outcome since some of the respondents did not declare their votes.

“These findings suggest that a large chunk of the electorate is still waiting to be convinced, during the year  remaining before Ghana’s 2020 presidential election, to vote for a specific candidate – or even to vote at all,” the report indicated.

The government has said a bill to stop a no-deal Brexit will complete its passage through the Lords on Friday. The proposed legislation was passed ... Read More

The Food and Drug Authority (FDA) has begun a nationwide assessment of a good deal of equipment used in the various Health Facilities. The move ... Read More

Banking cleanup: All depositors will be paid – SEC Boss

The Director-General of the Security and Exchange Commission (SEC), Reverend Daniel Ogbarmey Tetteh has assured that government will settle the claims of all affected depositors ... Read More