Markets in the Greater Accra Region have closed down for a disinfection exercise being undertaken by the government.

The exercise has become necessary following the confirmation of over a dozen case of COVID-19 in Ghana.

Obuoba fm, is monitoring the exercise at the Makola Market said all traders had heeded the directive to close their shops to allow the exercise to be conducted.

Around 5.30 am, he said the market was empty with very few human movements around.

At the Ashaiman Mandela market, Obuobafm.com has is that traders had neatly covered their wares and absented themselves from the market to allow the exercise to be conducted. 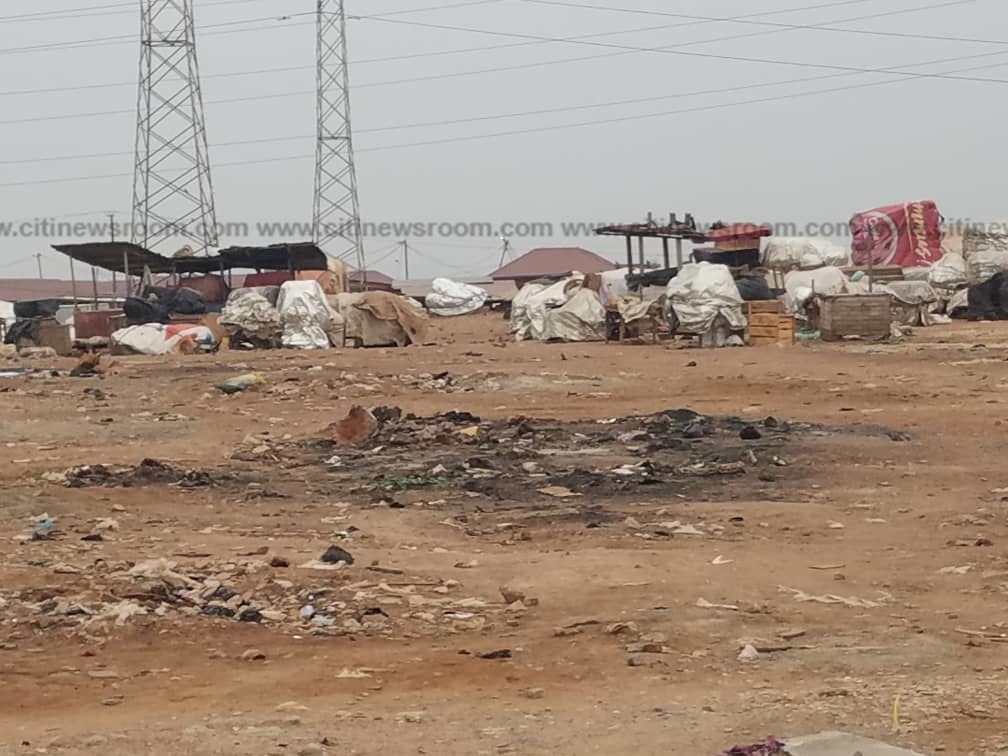 The Ashaiman Municipal Assembly, however, arrested some women who attempted selling at the Mandela market in defiance of the directive.

All four entrances to the Tema Community 1 market were closed as authorities prepared to disinfect the market around 6.30 am.

Nana Tuffuor Boateng reported that there was little human activity at the market which is usually packed with traders and shoppers by 6 am.

Although the exercise was yet to begin, the team of sprayers and other authorities had been spotted at the forecourt of the Tema Metropolitan Assembly.

He said, the closure of the market had affected other ancillary businesses within the area such as commercial transport. 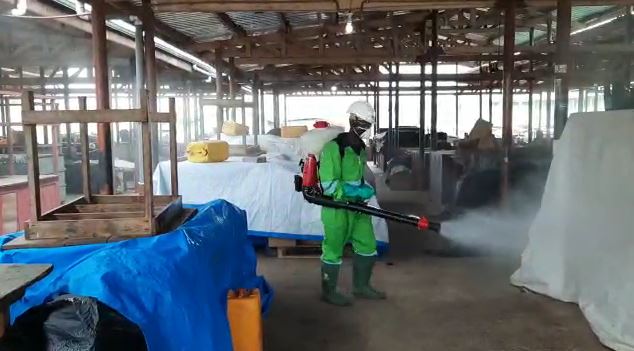 Disinfection team from the Tema Metropolitan Assembly arrived around 8 am to commence the exercise.

Naa Adoley Moffat said officials of the Ayawaso Central Municipality were seen at the Mallam Atta market sacking squatters and some markets women who came to offload their goods in the market although the exercise was yet to begin.

Some 10 sprayers have been assigned to each of the 137 markets earmarked for the exercise in the Greater Accra Region.

At the Okaishie market, the place appeared to be deserted. Although the exercise was expected to start at 6am, no sprayer was spotted at the market as at 6.45 am.

At the Adabraka market, the main entrances had been put under lock and key to prevent market traders from accessing the market. 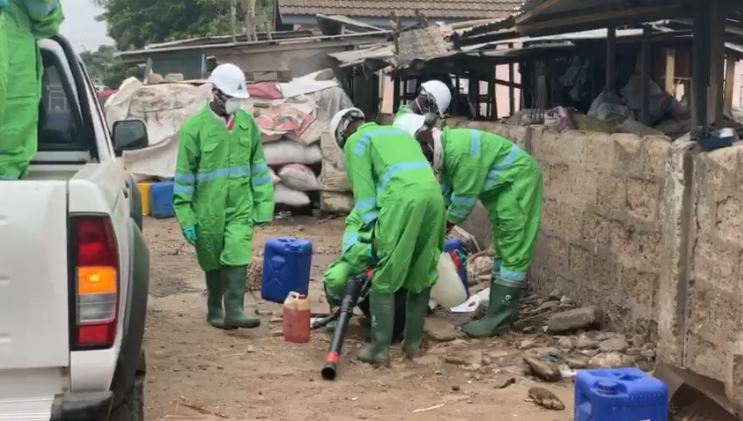 Scores of traders from Yeji, Donkorkrom and Suhum who showed up at the Adabraka market to buy and sell fish were left stranded.

They claim they were not aware of the planned closure for the exercise, arguing that officials of the Korle Klottey Municipal Assembly communicated a different date for the exercise to them.

The Achimota market usually seen bustling with activity by 5 am was empty when Obuobafm.com visited.

All shops had been closed in compliance with the Local Government Ministry’s directive to allow for the scheduled disinfection exercise. 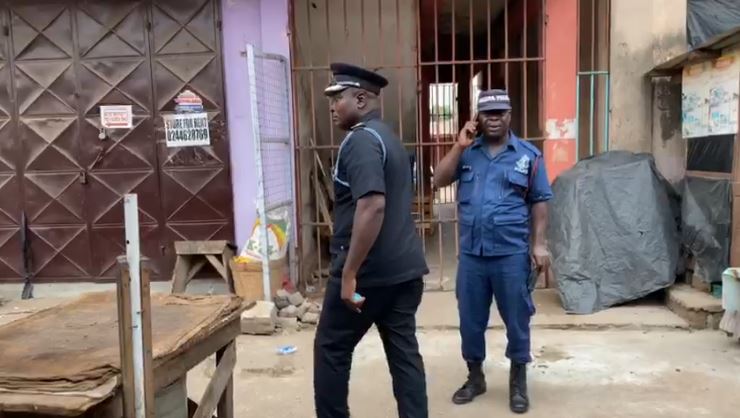 A clinic within the market was, however, opened.

One of the nurses at the clinic, Priscilla Gyamfi told Obuobafm.com that, they do not see the need to close as they are a health facility and do not consider themselves a part of the market.

The clinic was later on closed after deliberations.

Officials from the Tesano Police Command came to inspect the Achimota Market to ensure no trader was present ahead of the disinfection exercise.

The inspection team was lead by the Divisional Commander, Supt. George Atia.

Traders at the Amasaman market within the Ga West municipality had properly covered their wares awaiting the fumigation exercise to take place when Obuobafm.com visited.

Citi News’ Philip Nii Lartey said although the directive was for markets to close, mini shops lined up along the streets had also closed.

At Tiptoe lane near the Kwame Nkrumah Interchange, shop owners and traders told Obuobafm.com that they were patiently waiting for authorities to begin the exercise.

They have therefore closed their shops and covered up products outside to allow the exercise to be conducted. 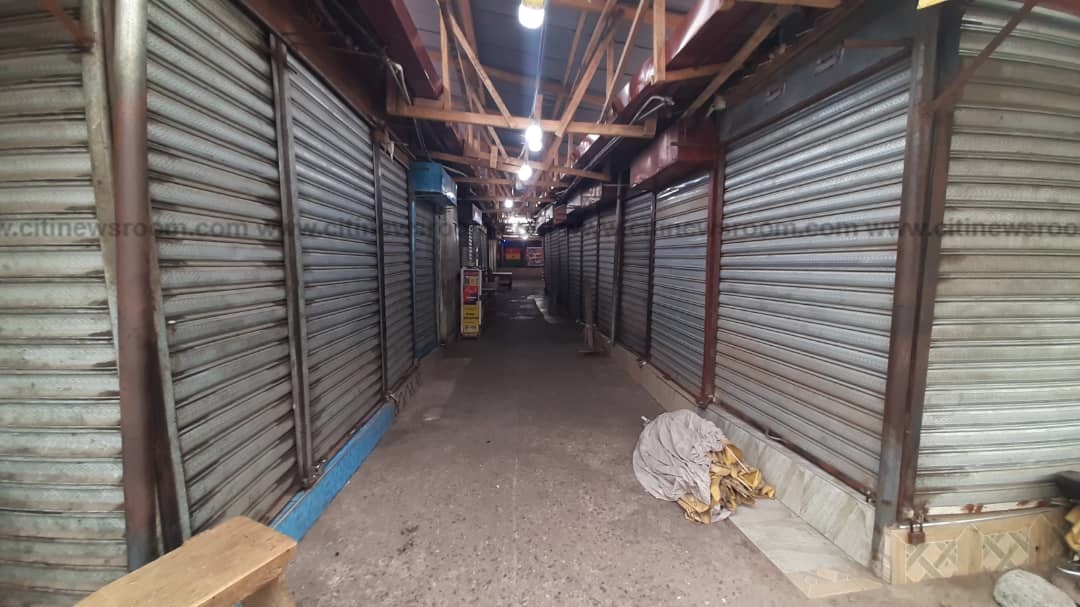 Around 7.30 am, sprayers arrived at the Kaneshie market complex to commence the process.

Over ten fumigators from Zoomlion company limited arrived at the Kaneshie Market complex, to begin with the exercise.

According to the drivers, the exercise will negatively affect their business as most of their regular passengers have had to find other means of transportation to their various locations.

The drivers, however, insist that they are ready to comply with the directives.

Termination of PDS deal was unwarranted, $190m withdrawn – US

The United States of America has described the termination of the concession agreement with Power Distribution Services (PDS) as unwarranted. Despite the government’s claims of ... Read More

The Government of Ghana, on Tuesday received, as part of Germany’s Compact with Africa programme, €250 million from the Government of the Federal Republic of ... Read More

The Greater Regional Branch of the Ghana Private Road Transport Union (GPRTU) says it may reduce the number of passengers who board its commercial buses. ... Read More