The Vice President Dr Mahamudu Bawumia has commissioned Ghana’s largest fertilizer factory at Asuboi in the Ayensuano District of the Eastern region.

With a production capacity of over 800,000 metric tonnes per year, the Glofert Fertilizer Factory, a wholly owned Ghanaian company built under the One District One Factory initiative of the Nana Akufo-Addo government, is the first fertilizer production plant outside the Tema Industrial enclave and produces all kinds of fertilizers notably Urea, Ammonium Sulphate, as well as NPKs which are widely used by farmers in Ghana and across the continent of Africa.

Ghana has an annual fertilizer requirement of 600,000 metric tonnes, according to officials of the Ministry of Food and Agriculture.

Vice President Bawumia expressed delight at the successful partnership between Government, represented by the One District One Factory Secretariat, and the private sector represented by Glofert Limited, which had led to the creation of jobs and the production of increased crop yields for Ghanaian farmers.

“There is something special about today. Today we are adding one more major step towards achieving the President’s vision of building a Ghana Beyond Aid. Because one of the pathways to achieving this vision is through agricultural transformation — making farming attractive, increasing farmers’ productivity, increasing their income and making it possible for agriculture to support industrialization,” he stated

“The Government of H.E Nana Addo Dankwa Akufo-Addo has been very keen about delivering on its promise to create a viable, self-sustaining economy.  One of the means by which this can be achieved is through modern industrialization and to reduce our dependency on the outside world through imports to produce our own food,” and this would largely be done through the One District One factory Initiative, the Vice President indicated. 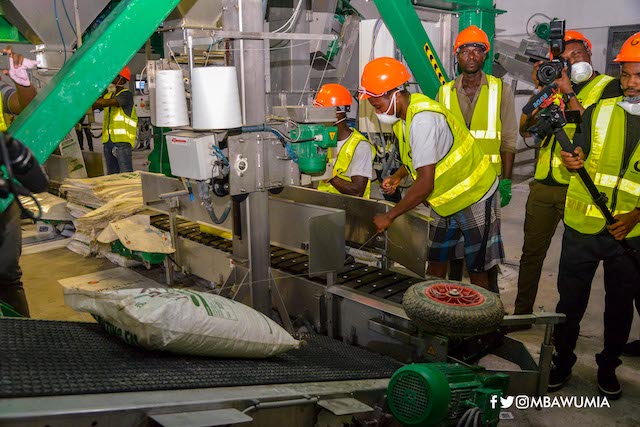 Vice President Bawumia disclosed that Government has recently obtained Parliamentary approval for tax incentives framework covering various tax exemptions for companies seeking to operate under the 1D1F programme, including five year tax holiday; waiver from import duties and taxes on equipment, machinery and parts; waiver from payment of duties and levies on raw materials; and a waiver from the payment of withholding taxes.

Alluding to the fact that Glofert alone can meet the country’s fertilizer needs, in addition to the fertilizer produced by the four other producers, Vice President Bawumia charged the Ministry of Food and Agriculture, Cocobod and other stakeholders to now buy from domestic sources and not waste valuable foreign exchange on imports of fertilizer going forward.

On his part, the Chief Executive Officer (CEO) of Glofert, Rev Foster Mawuli Benson, expressed appreciation to Government for the support which has led to the establishment of the factory that has provided full time employment for 35 persons and casual employment for 180 others.

Recently launched insurance firm, Bedrock Insurance Company Ltd, is determined to break through the fierce competition within the sector with a host of customer-centred innovations. ... Read More

Markets in the Greater Accra Region have closed down for a disinfection exercise being undertaken by the government. The exercise has become necessary following the ... Read More

West Africa, with about 380 million people, is the final frontier for global automakers looking to increase manufacturing capacity in a region where they currently ... Read More