Members of the Minority on the Appointments Committee of Parliament have joined hands with their colleagues in the Majority to approve the nomination of Justice Honyenugah as a Supreme Court judge.

A report by the Committee sighted by Starr News shows a unanimous approval of the judge and the three others who appeared before the House for vetting.

The minority appears to have rescinded their earlier objection to Justice Honyenugah approval over endorsement of President Akufo-Addo. 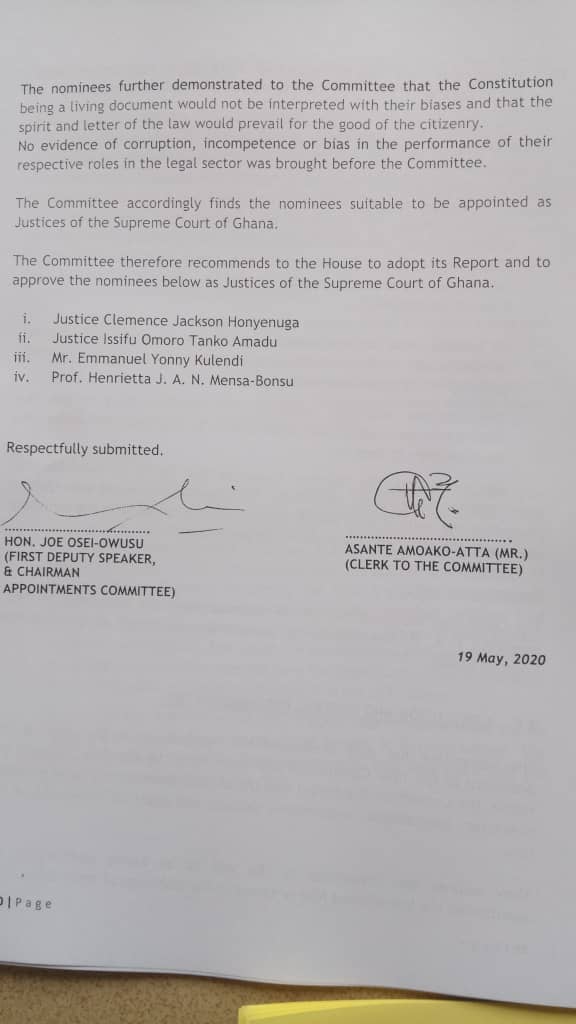 Justice  Honyenuga during his vetting apologised for appearing to endorse President Nana Addo Dankwa Akufo-Addo during a durbar in the Volta region early this year.

Justice Honyenuga in his welcome address to President Akufo-Addo at a durbar of chiefs and people of the Afajato South District had commended the President for various developmental policies introduced under his leadership.

He said “with the vision of the President and the gains made in his first term, Ghanaians may consider giving him another four years” to the loud cheers of people at the durbar grounds.

Many, including legal luminaries, who felt the judge probably erred in this open declaration took to social media to criticize his conduct.

Some media reports suggested the comments were meant to endear him further to the current government for his nomination to the Supreme Court.

Answering questions during his vetting, the Supreme Court Judge nominee apologised for endorsing the President saying he was only reading a statement handed him on behalf of the paramount chiefs.

“In reading that statement, we didn’t intend in endorsing the president, our understanding was that we were wishing him well…this is what has been happening in this country for a very long time…on my part if out of political dissatisfaction some people are unhappy

The National Labour Commission (NLC) is set to meet with relevant stakeholders in the employment and education sectors today, October 28, 2019, to strike by ... Read More

Tension is mounting between students and authorities at the Akropong School for the blind after a chaplain at the school was caught molesting a blind ... Read More

President Nana Akufo-Addo has urged the country’s security agencies to deal with any group of persons who will attempt to cause mayhem during this year’s ... Read More