The Police has warned against what they say is a planned demonstration against the United States in Ghana following the killing of George Floyd by law enforcement official in America.

A statement signed by Police spokesperson DSP Effia Tenge said calls for mobilisation for demonstration is trending on social media. The hashtag #Blacklivesmatter is trending on twitter in Ghana. 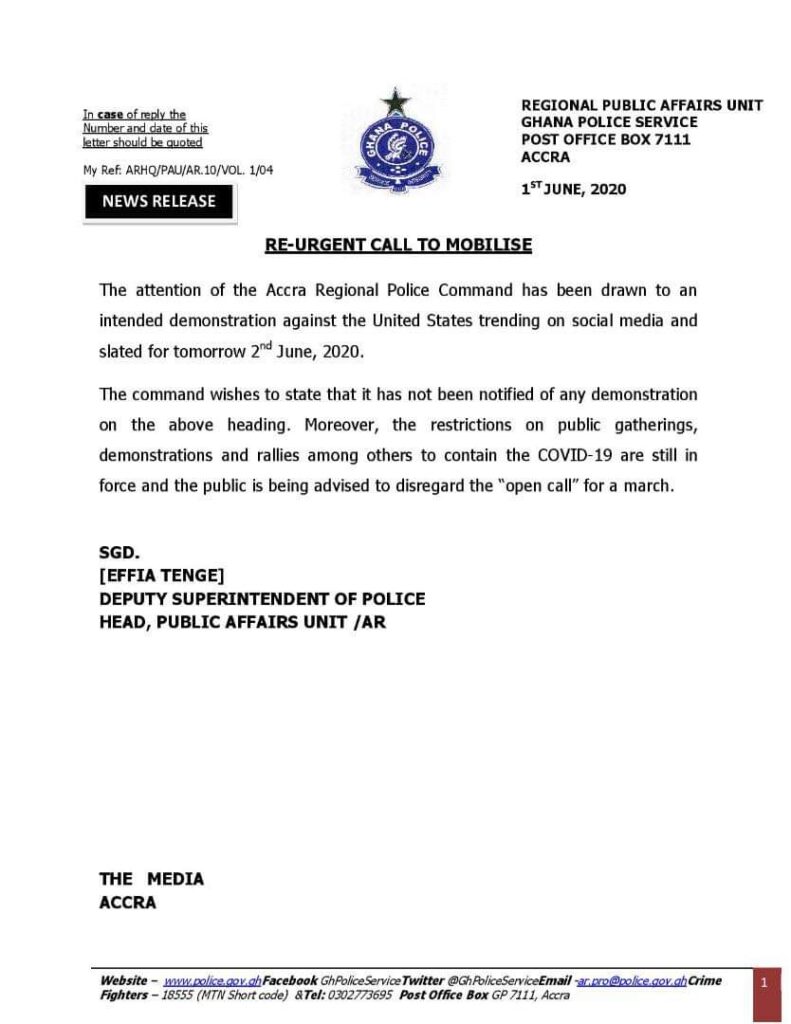 Meanwhile, President Akufo-Addo has extended his condolences to the family of George Floyd.

In a post on Facebook, the President said: “Black people, the world over, are shocked and distraught by the killing of an unarmed black man, George Floyd, by a white police officer in the United States of America. It carried with it an all too painful familiarity and an ugly reminder. It cannot be right that, in the 21st century, the United States, this great bastion of democracy, continues to grapple with the problem of systemic racism.

“On behalf of the people of Ghana, I express my deep condolences to the family and loved ones of the late George Floyd”.

The President added: “We stand with our kith and kin in America in these difficult and trying times, and we hope that the unfortunate, tragic death of George Floyd will inspire a lasting change in how America confronts head on the problems of hate and racism”.

On May 25, 2020, George Floyd, an African-American man, died in Powderhorn, a neighborhood south of downtown Minneapolis, Minnesota. While Floyd was handcuffed and lying face down on a city street during an arrest, Derek Chauvin, a white Minneapolis police officer, kept his knee on the right side of Floyd’s neck for 8 minutes and 46 seconds; according to the criminal complaint against Chauvin, 2 minutes and 53 seconds of that time occurred after Floyd became unresponsive.

Why Ghana needs its own ‘Dangotes,’ ‘Jack Mas’

THE world has never been short of givers. From the precious gift of life itself through knowledge to wealth, numerous people across the world have ... Read More

Kanye West says he is running for US president

Kanye West has announced he is running for US president – and he has already won the backing of billionaire Elon Musk. The American rap star ... Read More

An $80 million bounty has been placed on Donald Trump's head in the wake of General Qasem Soleimani's assassination, according to reports. During the televised ... Read More