Anti-graft campaigner Bright Simons has called on Special Prosecutor nominee Kissi Agyebeng to commit to recuse himself from all matters relating to the Agyapa mineral royalties deal if he secures the job.

According to him, the closeness of Mr Agyaben to law firms backed by cousin to the President, Gabby Otchere-Darko, who is in support of the controversial deal, is concerning.

“Mr. Agyebeng is a fine lawyer. But if he wants to be SP as reported then he must COMMIT to recuse himself from ALL Agyapa matters. Given his close links to White & Case & ALA (run by Agyapa supporter, Mr. Okyere-Darko) else CSOs will oppose his appointment,” Mr Simons wrote on Twitter Monday.

“The former Special Prosecutor resigned over the Agyapa deal. CSOs believe that his “corruption risk assessment” saved the country $billions & was his biggest legacy. The decision to appoint a lawyer super-close to the law firms behind Agyapa gives CSOs every reason to be worried,” he added.

The Attorney General has nominated legal practitioner and Chairman of the Electronic Communications Tribunal Kissi Agyebeng for the vacant position of Special Prosecutor (SP).

Obuoba FM had earlier reported the law lecturer had been penciled for the job.

If confirmed, he will replace Mr Martin Amidu who announced resignation as a special Prosecutor on the 16th of November, 2020, citing political interference by his appointer, President Akufo-Addo for his decision. 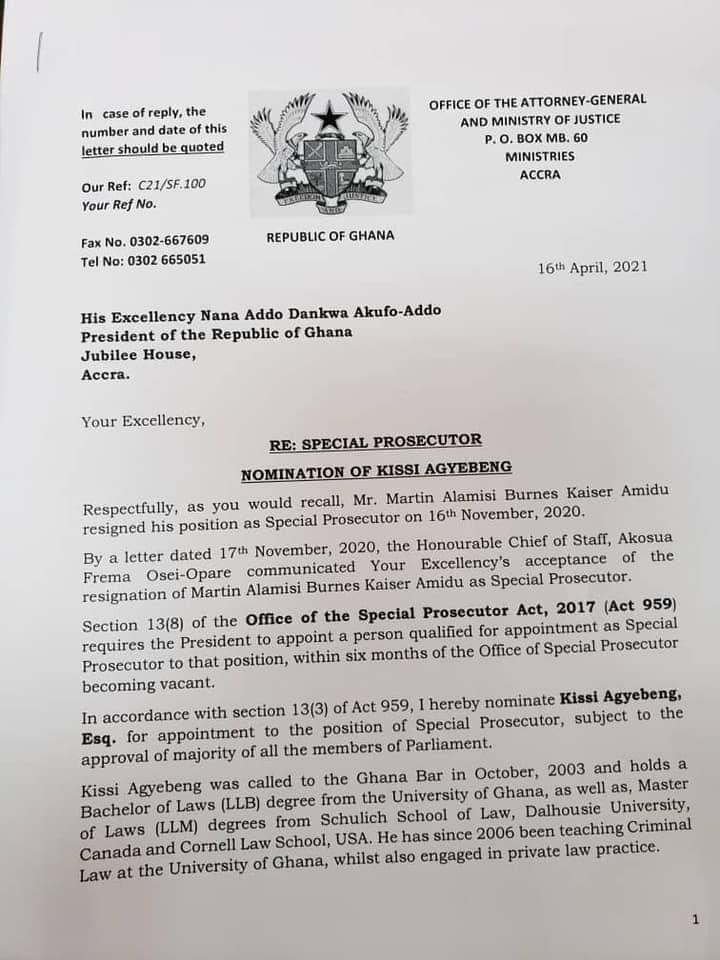 Mr. Agyebeng is a private legal practitioner who has argued numerous cases before the Superior Courts of Ghana and has also been engaged in several international business transactions.