The Kwahu Obo Traditional Council in the Eastern Region has summoned the Krontihene of Kwahu Pitiko Nana Adu Parko I over assault of the Chief of Pitiko Nana Frimpong Akoamire II by armed thugs.

The thugs, wielding guns, knives, sticks, and other dangerous implements invaded the house of the Chief in the evening around 9:00 pm and subjected him to severe beating, tore his clothes, and paraded him half-naked on the street.

Meanwhile, the Obo traditional council will on Monday, April 19, perform rituals to purify the Pitiko stool and the assaulted Chief.

The Chiefs will also invoke the wrath of the gods on the perpetrators of the crime. 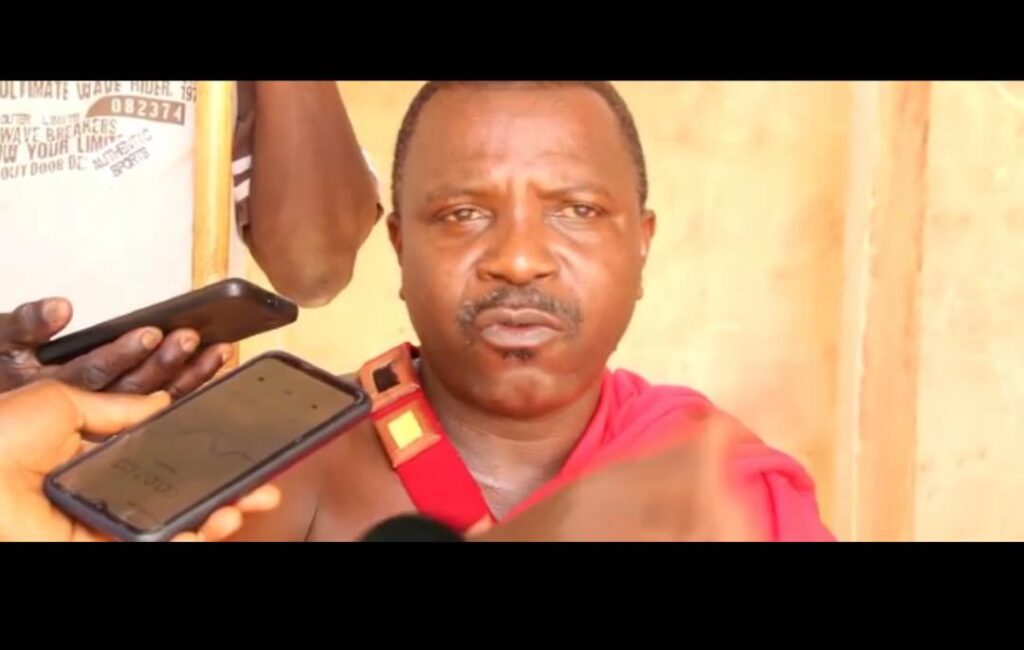 The Chief of Kwahu Pitiko was beaten, dragged on the ground, and paraded semi-naked on the street by armed wielding thugs.

The thugs numbering about 30, wielding guns, knives, sticks, and other dangerous implements invaded the house of the Chief-Nana Frimpong Akoamire II at about 9:00 pm and subjected him to severe beaten, torn his dress, dragged and paraded him on the street.

The injured chief was forced to walk barefooted from Fori Fori Community to Adumasua kilometers before being transported on a motorbike to Tease where he was paraded on the fateful night before the Krontihene of Pitiko Nana Adu Parko I who allegedly admitted to sanctioning the attack.

“I was seated here with the Queen mother and my sister discussing some issues at about 9:00 pm, then suddenly, some thugs invaded the house started smashing my vehicle. So, I attempted to dash out to my room to take cover, but two of the men welding guns pulled a pistol and threatened to shoot me if I moved an inch.”

“So, they pulled me out of the house and started assaulting me, knocked me down on the ground, and dragged me on the gravels. They were numbered about thirty wielding guns, machetes, sticks other offensive materials,” the Chief narrated.

He continued “they told me the Police is aware of their operation. Then they took me and paraded me at gunpoint through the street walked to Adomasua barefoot and half-naked while hitting me with the sticks and cutlass. They dehumanized me”.

The badly injured Chief was subsequently taken to the Police station by the thugs and the Krontihene. A medical form was issued to him to seek treatment at Tease Presbyterian Clinic.

“The thugs took me to the Police station. I was very weak and couldn’t stand so I laid flat on the floor. So, the police gave me a medical form for treatment. None of the thugs were arrested. The only thing the police did was retrieving my mobile phone for me so that I could reach out to my family”.

Nana Frimpong Akoamire II was referred to Atibie where he was admitted, treated, and discharged Wednesday, April 14.

He was given two-armed Police escorts by the Abetifi Police to return to Tease District Police Command in Afram Plains South on Thursday, April 15  to write a formal statement on the incident to enable police investigation.

A woman who witnessed the incident corroborated that ” the Chief struggled with them but they outnumbered him, beat him mercilessly, knocked him down and dragged him on the ground. In fact, I urinated on myself out of panic. In fact, they beat the Chief “.

Meanwhile, Nana Akuamoa Asumani, Pitiko Akwamuhene has accused the District Chief Executive of Afram Plains South George Ofori of being behind the Krontihene in carrying out the thuggery.

“…That the DCE has been releasing his official vehicle to the Krontihene for all his travels. Even in the recent Akwasidae, he came with him to Forifori. Some of the suspects who committed that act are closer to the DCE. Some of the suspects accompanied the assaulted Chief to the Police on the fateful day but the police refused to arrest them because it was orchestrated by the DCE and the Krontihene.”

The DCE George Ofori has however denied knowledge of the thuggery. He said he has called on the District Police Commander to investigate and arrest the perpetrators.

The Krontihene of Pitiko was yet to comment on the matter.

The attack has heightened tension at Kwahu Pitiko traditional area as supporters of the Chief are on the alert to clash with any group that invades the community.