Scores of supporters of the National Democratic Congress(NDC) have been mocking former party member and General Secretary of the party Koku Anyidoho following news of his suspension from the party.

His suspension came after two separate petitions from two registered members of the NDC against his conduct which is viewed to be in breach of the party’s disciplinary code for its members as contained in the NDC constitution. His membership was hence suspended pending a full hearing.

Days before his suspension, Mr. Anyidoho said that the NDC will be rescued from dying. In a tweet, he indicated that while former presidents, John Evans Atta Mills and Jerry John Rawlings have died, it does not also mean that the vision of the NDC has gone with them.

“The fact that President Rawlings & President Atta-Mills are dead, does not mean the NDC is dead. We are going to rescue our NDC from the throes of death and breathe new life into it,” promising to rebuild the NDC.

“Revo Revo Revolution has a long way to go, but has come to stay. We shall re-build the NDC. Aluta continua”. He wrote.

Some of the party members are now advising the Atta Mills Institute boss who promised to rebuild the NDC to sell the blocks he had procured for the rebuilding the party since his membership has been suspended.

“Koku can sell the blocks he wanted to use in rebuilding NDC!!.

Another member, Abdul Hammeed advised the ex NDC deputy scribe to donate the NDC rebuilding blocks to the National Cathedral.

“NDC people too why? Just when senior mason was getting ready to rebuild the party, you sack him. So the bricks and mortar gathered nu, what he go take do? Or we should dash it to National Cathedral people?” he wrote.

Read some posts below: 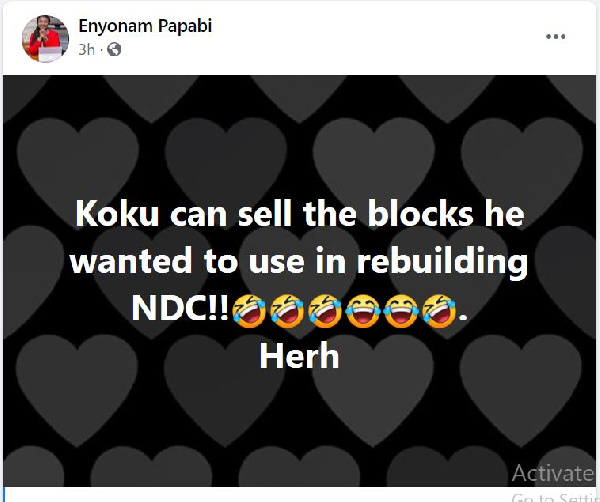 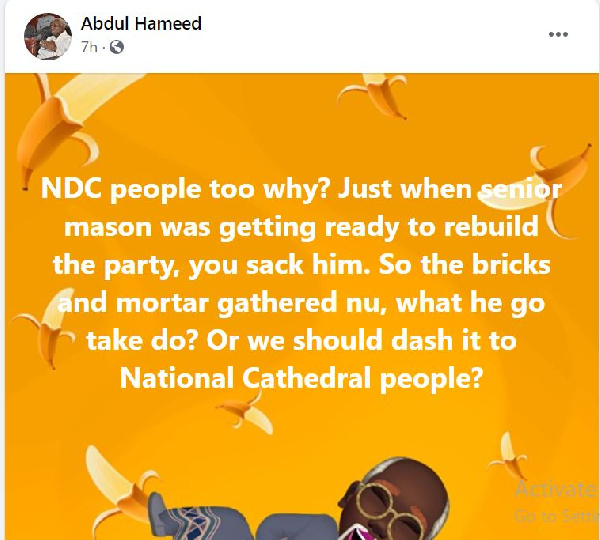