The unidentified man who invaded the premises of Zylofon FM threatening to kill the drive time host, Blakk Rasta, was shot by the Head of Security of the media house after he tried to escape, management has said.

According to a statement issued on January 6, 2021, the invader attempted to escape at the time the Legon District Police had been called in to maintain sanity.

On January 5, Blakk Rasta announced via slot terbaru social media that “Transmission on @zylofon1021fm shut down. A man broke into the building, masked threatening to kill me. Police and security here…”

Management while confirming the incident said, “This man first went to the station’s server room, succeeding in disconnecting some of our cables, therefore, shutting down transmission before threatening the life of the host of Taxi Driver Show, Blakk Rasta, known in private life as Abubakar Ahmed.”

The man is said to have broken security protocol by spraying “a strange content into their eyes”.

Luck, however, eluded him as the Head of Security “shot him with a licensed gun” to prevent him from escaping before the arrival of the police.

“The police team upon arrival took the shot assailant away judi slot online jackpot terbesar together with some staff of the station to help with investigations and has since taken charge of the premises to ensure the protection of life and property,” officials of the media house said in the statement.

Meanwhile, the management says Blakk Rasta is “safe and unhurt”.

Below is the full statement. 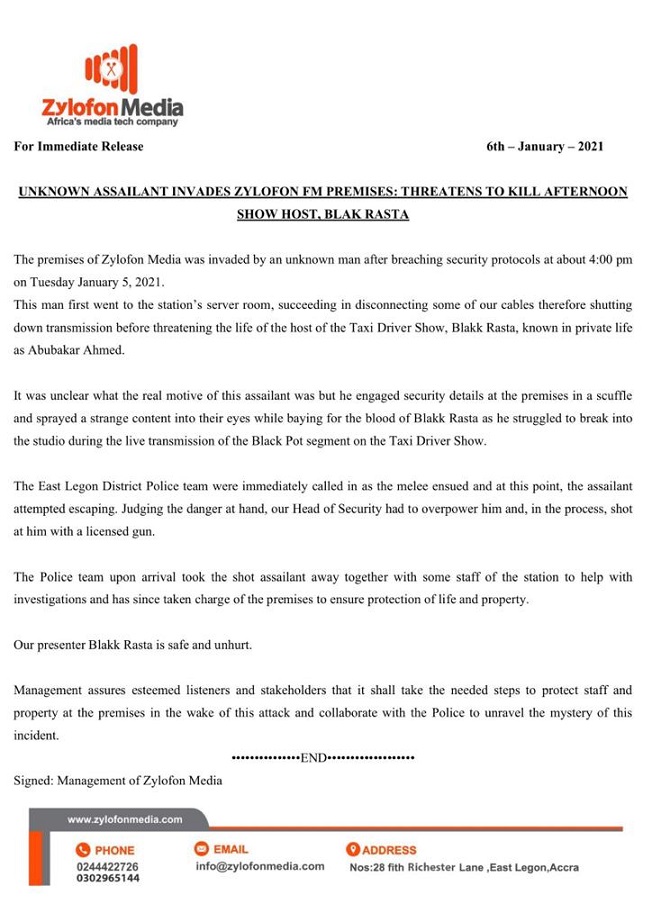